On our last day in Florence, we took a day trip to Genoa. It just didn’t make as much sense to get to Genoa from Rome which is where we were headed the day after. Unfortunately, we decided Venice will have to happen on your second trip to Italy, which we are certain we will take in the future.

Jeannine’s mom’s family came from Genoa and small towns in the general vicinity. So we wanted to get the vibe of that city. We didn’t really think our day through in advance, which proved to work to our detriment. After three days of walking all over Florence we were beat and decided we needed a sleep in. That meant that we didn’t get on a train to Genoa until 11. And in turn that didn’t put us Genoa around 2pm. The last train back to Florence left the station at 7pm.

Those five hours were too much time to just walk around the city, and they were not enough to go to the Aquarium or any of the other museums there. In addition, Italians eat dinner, late, 8pm at earliest. So, trying to get some dinner before hopping back on the train was difficult. We found may places we were interested in, but they opened too late. Net, we think a second, better planned visit is in our future.

We did manage to eat some focaccia and pesto, two foods the region is known for. And they were both great. Jeannine tried zucchini focaccia, and it was super. I tried the cheese focaccia, and it was a little more dense than what I was hoping for. We both had pesto at dinner, and we both enjoyed what we had very much. 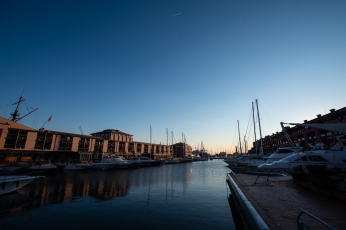