As a massive Kerouac fan, I was excited to visit Big Sur, the setting of Kerouac’s book of the same title. Kerouac’s epic descriptions of crossing Bixby Bridge had me captivated. And even though Kerouac was in the last stages of his surrender to alcohol when he wrote his last book, his appreciation for the natural landscape shined through all his episodes with DTs.

I thought I would make the trip to Big Sur during my time in Seattle. But my months there filled too quickly with hiking day trips, and work and personal trips out of town. As a birthday treat, Jeannine booked us a cabin there and some flights. Although I assumed this would be a trip I would take on my own, it’s clear I thought no one would have interest in joining me rather than a wish for solitude. The number of other Kerouac fans that I’ve known can be counted on one hand. And the intersection between close friends and Kerouac fans yields exactly one.

We flew into San Francisco for a couple of days. Since we have both been there often enough to have exhausted all the typical tourist destinations, we took leisurely strolls across the city looking for some delicious food and enjoyable parks. Food find of note: Tartine is not to be missed.

We declined the entrance fee to the San Francisco Mission, but the outside of the old church was anachronistic in The Mission and worth a look. We were lured away by the people walking by with free Noosa yogurt. Our desire to seek this out was admittedly silly. Unless eaten immediately the yogurt would have gone to waste in our bags without refrigeration for the duration of the afternoon. This low-key vacation was made for following random impulses though, so the Noosa distraction led to a street fair.

The only mildly tourist activities we engaged in were visits to The Beat Museum and Visuvios. The Beat Museum was, well, beat. It was rundown and lacking in much paraphernalia apart from a number of Allen Ginsberg’s photographs that I have seen reproduced numerous times. Yet I was surrounded by a period and culture that has fascinated me for much of my adult life, so I was pleased none the less. With Visuvios just kitty corner to the museum , it felt wrong not to stop in.

The AirBNB place that we stayed in was super. Matt and Jeff were lovely hosts. Give them a look if you are ever travelling there.

This was the view from our Air BNB room. Even with an overcast day it was sublime.

Vulcan Steps are lovely and should be explored. This is among its gems that appeals to my inner five year old. 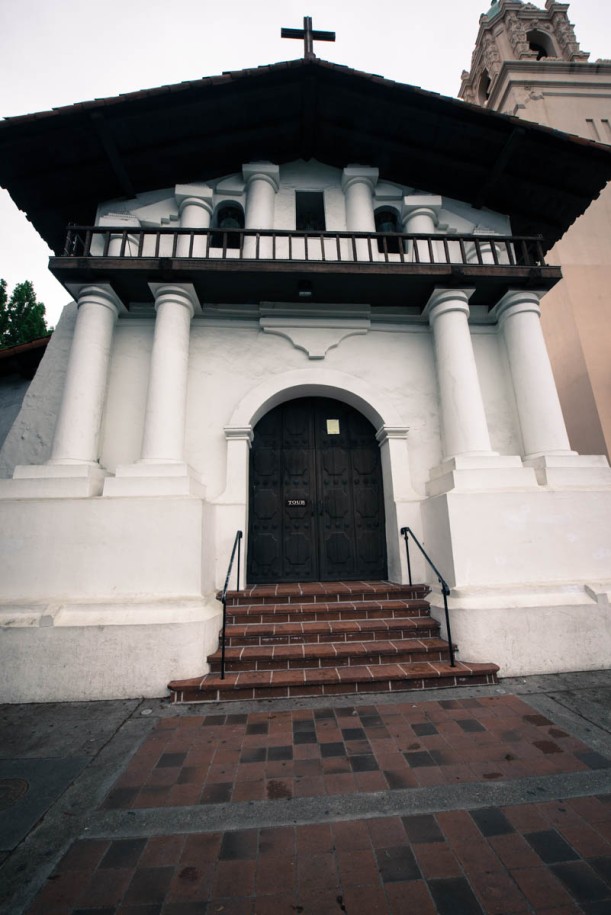 Delores Mission. We could have paid 5 bucks to get in here. But I didn’t think The Pope needed my money. We bought pastries instead. I still feel good about out choice. 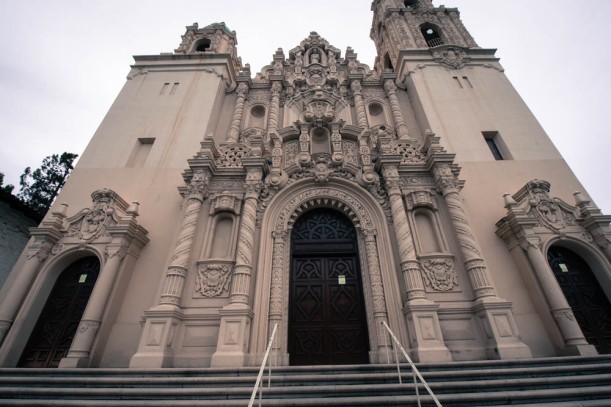 This is opulent. The signed on the door say no trespassing. Opulent and off limits.

Weird to have that monster right next to the humble Spanish mission.

Abandoned bike locks. The key gets lost or the bike gets incapacitated. Then what?

But it looks so inviting.

Yep. That’s a woman with a baby in her baby-maker up top. I am a feminist. I’m just not so sure we need to be so explicit about it.

Santa Cruz boardwalk is like Coney Island but more bright and sparkly and less used needles and grime.

Oh, hey 50’s motel. THEY HAVE TV!! Which of course you need when you vacation at the beach.

Some random beauty from one of the many pull-offs on Highway 1. Seriously, it looks like that about half the time. When you aren’t seeing that you are seeing verdant hills and pastures.

We stayed at a wonderful cabin south of Carmel. It’s a little ramshackle place tucked into the side of a hill, filled with color furniture and fixtures that captivated the child in me. After we hiked up the hill, we were treated to a couple of days in this. 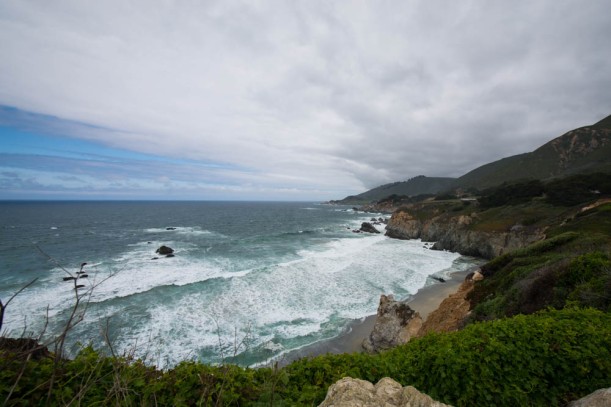 What can I say about Big Sur that the pictures don’t? Nothing except it was everything and nothing that I thought it would be. It was just as intoxicating and raw as Kerouac described it. Like Kerouac I expected this pilgrimage to be a reaffirmation of the ways in which I am alien in this world. What a wonderful surprise that I found this place full of awe and gratitude and shared it profoundly with Jeannine, as though it was always to be so.

This was right off Highway One. I am standing about five feet off the road.

This is the bridge I have been looking for… for years.

Since this song… Since Big Sur 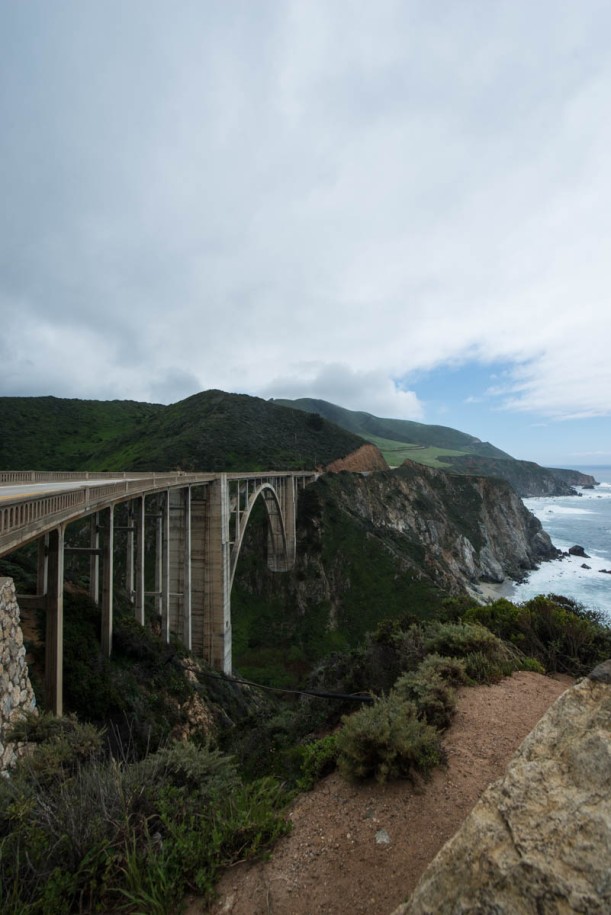 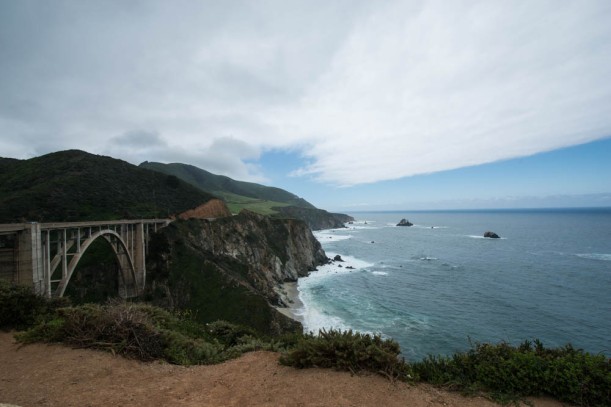 Kerouac marvels at this bridge in Big Sur. He talks about the sheer power of nature, and how he felt insignificant against it. 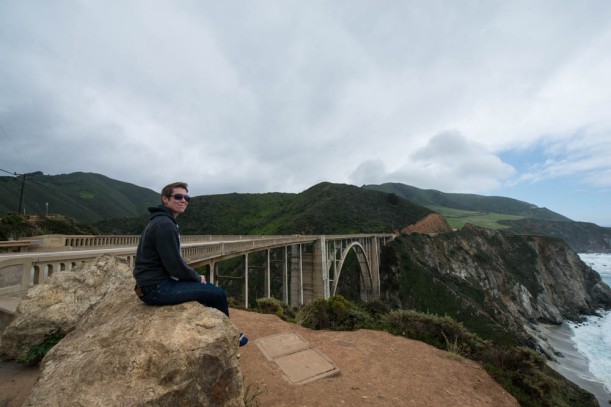 I understand what he means exactly. But where he felt insignificant, I feel comforted that we humans aren’t so powerful after all.

That time when you are trying to figure out how the timer works on your camera.

That time when you give up on making the timer work on your camera. 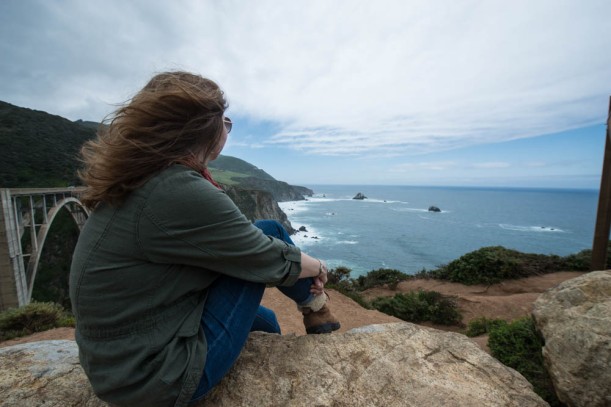 I wouldn’t have made it here without this one. 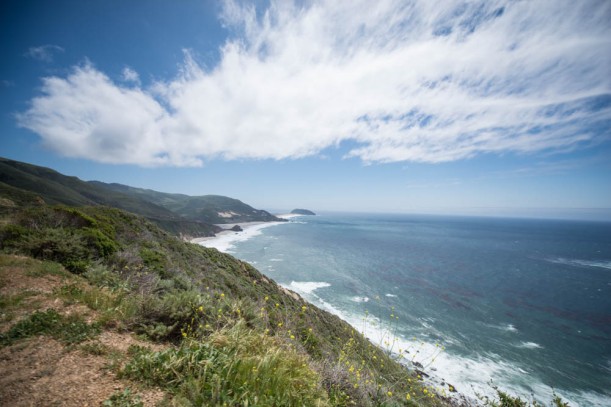 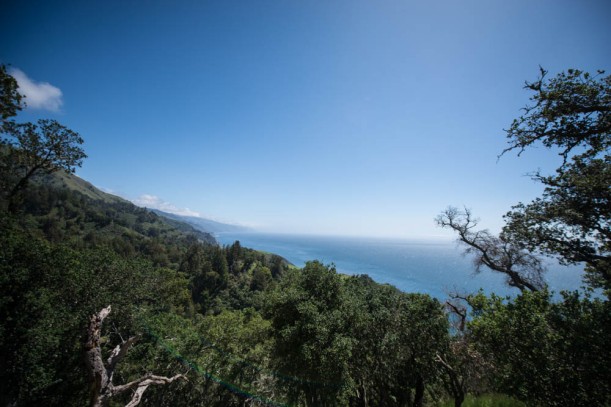 The Pacific from the deck of Nepenthe. I don’t know what voodoo they worked on their burger. I just know it was heavenly. 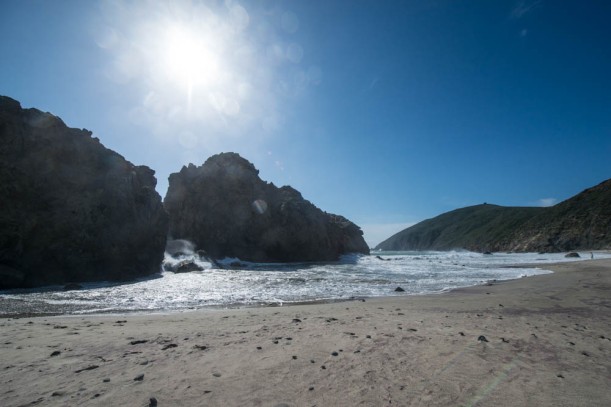 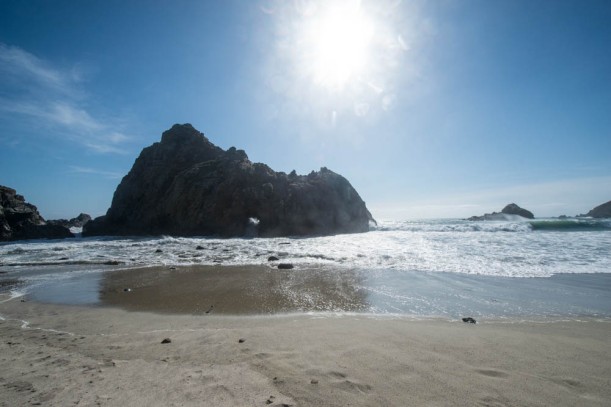 Pfeiffer Beach Big Sur California. The pictures adequately show the raw beauty of the beach. It doesn’t show that the winds were driving sand up off the beach and blasting my face with it. My face was very soft after the sand and salt scrub.

Pfeiffer Beach Big Sur California. That kid was brave. It was very cold. 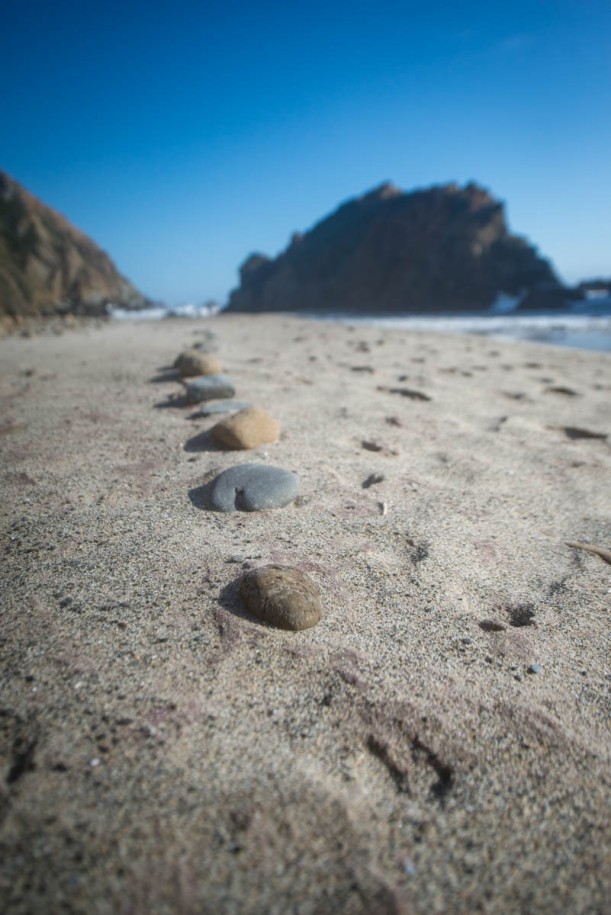