I have been fascianted with Pompeii since first hearing about it, so when a trip to Italy was first broached I enthusiastically said yes and POMPEII. I am fascinated by all aspects of the story. I am fascinated with seeing a city that was stopped in time and preserved across centuries. I am fascinated with the circumstances by which the city was extinguished and why it was forgotten and left untouched for so long.

I loved it. I want to go back and wander in it from dawn until dusk. I was struck with two things. First, the Romans were probably better city planners than we are now. Second, I left Pompeii with the conviction that those people weren’t all that different from us. Ancient history feels really remote, but they enjoyed food and entertainment just as we do. They took pride in their homes and in their work. And they also lived in comfort partially because they eploited people with less power. Not all that much has changed.

Walking the same streets that people walked 2000 years ago, I heard the echoes of the people who once lived there. The whole city felt as though the citizens were just out of sight; they would just duck around a corner moments before I turned it. They would disappear in doorways just before I raised my eyes to them. The armies of French teenagers roving there did a stellar job of throwing this vibe into the trash can.

Our guide Enzo grew up in Pompeii; his dad was a archaeologist who spent most of his career digging there. Enzo pulled no punches with the unruly French teens. I overheard him say bitterly to one of the other guides, “I go to the Louvre and talk in a normal tone of voice and get shushed by everyone. They send their kids here unattended, and they behave like little barbarians.” Although Enzo was very knowledgeable and funny, this was the moment that I knew we had the right guide.

But the obnoxious French teens weren’t enough to tarnish the experience for me. They were a minor annoyance. The next time I go back, I will however avoid field trip season.

These were in a bakery. Tiny bits of petrified grains were found in the bottom of them. 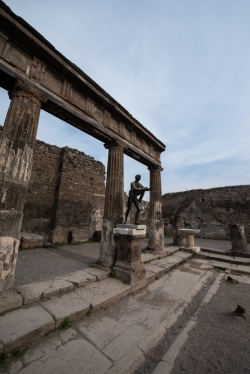 More of the brothel menu 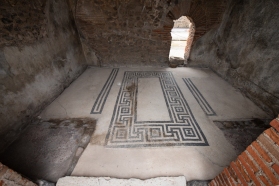 Mosaics in a wealthy person’s home 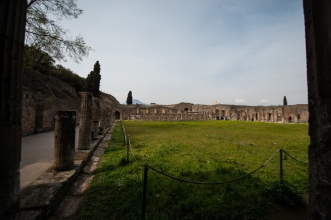 This was the training center for the gladiators. They were mostly slaves that had been taken on Rome’s many conquests.

This is a memorial for the people who died in Pompeii. It’s gorgeous. 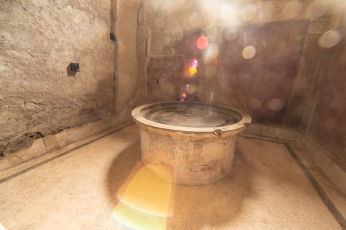 They put these on the stones of the streets to direct the sailors to the brothel. Again, they probably didn’t share a language, so this was a pretty great idea. 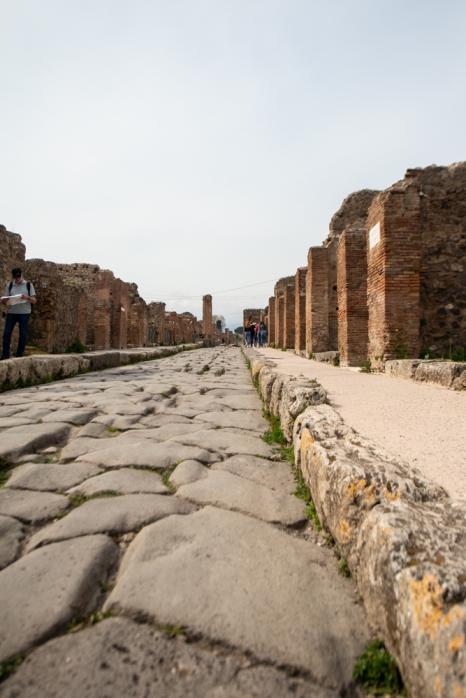 One of the streets 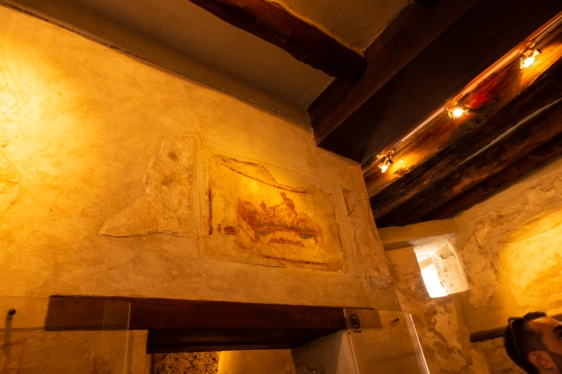 More of what you think 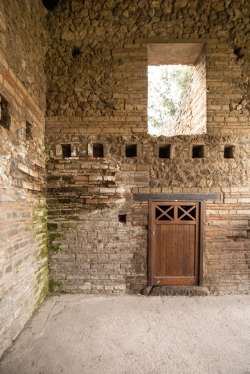 The inside of the galdiator training facility 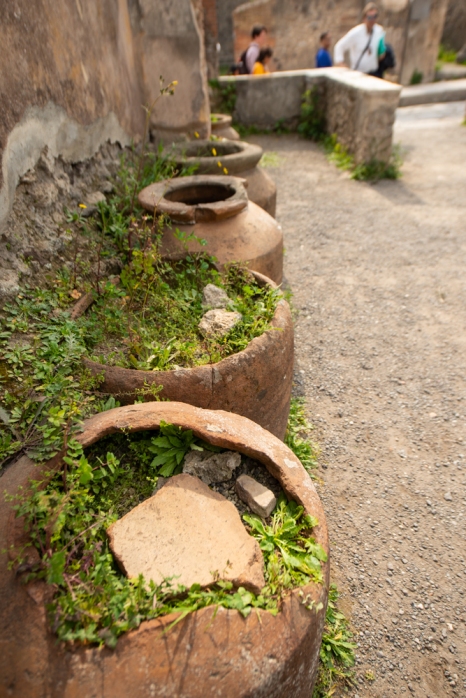 Grain storage pots in the bakery.

This is where the death rained down from 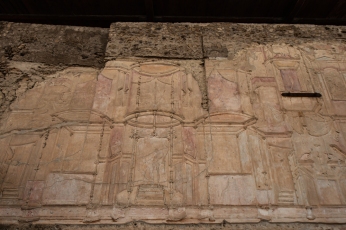 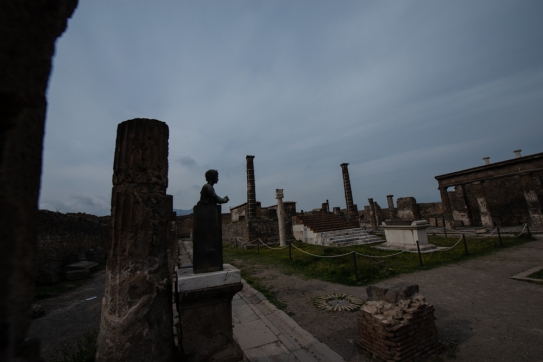 These pictures are what you think they are. 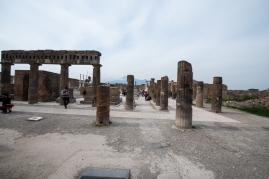 This was a fountain in a courtyard.

More of the brothel menu

A third of Pompeii has been left underground. This is to protect it from the next Vesuvius eruption that’s overdue and to protect the marble and structures from acid rain. 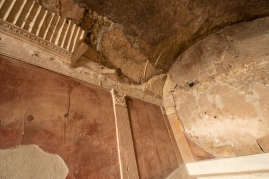 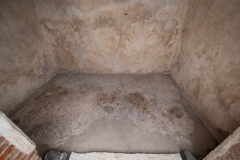 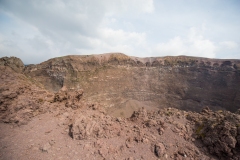 The crater of Vesuvius

This was one of the beds in the brothel. It’s made of stone. They didn’t wnat their customers getting too comfortable.

This is the political center of the city.

This is inside the women’s bath house. The holes in the walls are thought to provide a storage place for women’s clothes when they came for a visit. 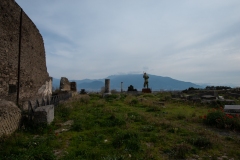 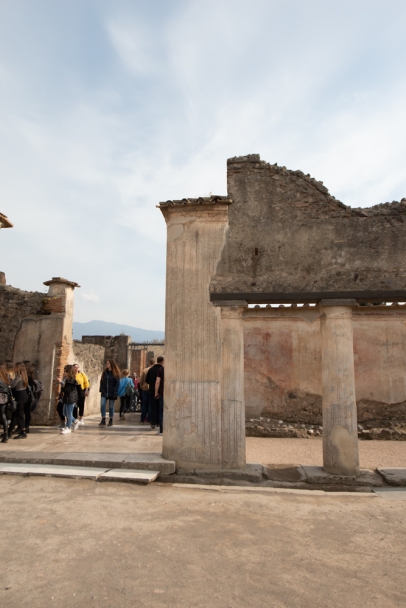 That’s a lead pipe. They used that to move water. 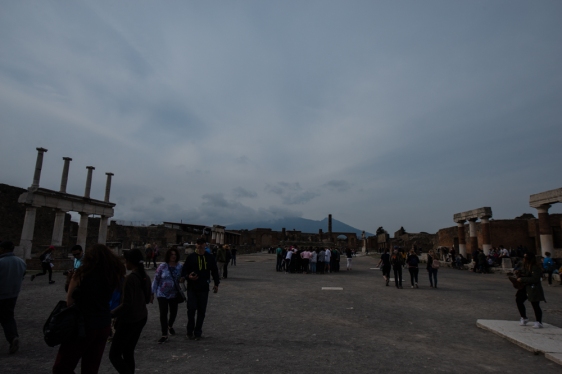 This is a bread oven. 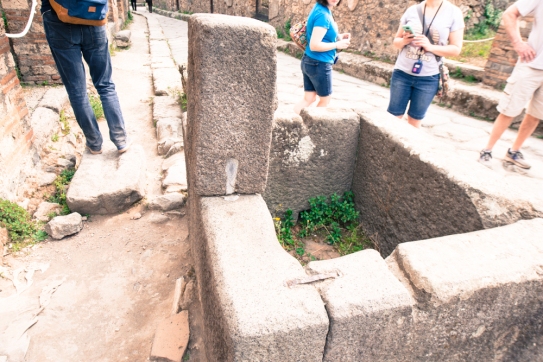 Public water fountain. Weathly people in Pompeii had water comming directly into their homes. The poors would come to these.

This is the outside of a women’s bath house.

In the political center of Pompeii

Stepping stones to cross the road. 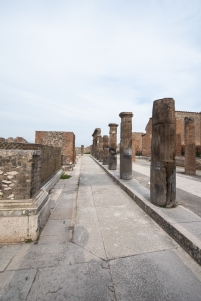 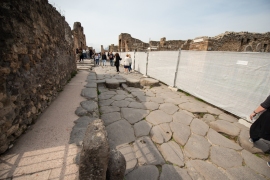 This is one of the roads. The raised stones are for people to step on to cross the road during rain storms, when the roads would be filled with water. 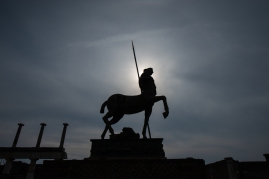 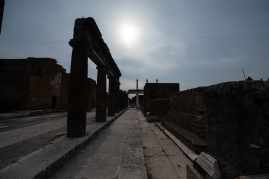 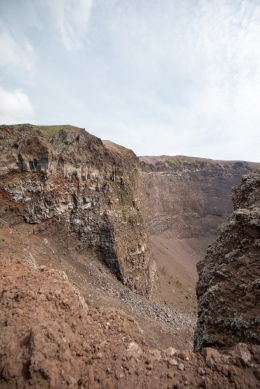 The crater of Vesuvius

Floor mosaics in the women’s bathhouse.

You can see an indentation in the stone. There was probably a window that would fit in there, so that the shop could be open to the air by day and shut up at night. 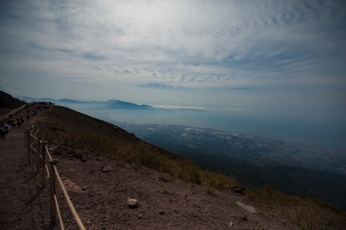 On the path to the top of Vesuvius

A plaster cast of one of the victims of Vesuvius’s eruption.

This is a bread oven. 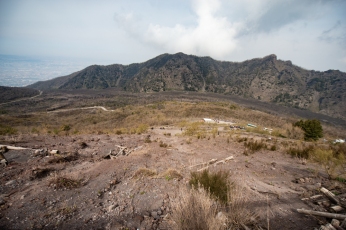 The trial we hiked to get to the top of Vesuvius 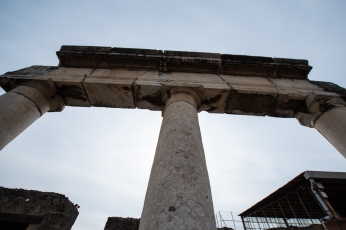 Vesuvius is overdue for an eruption 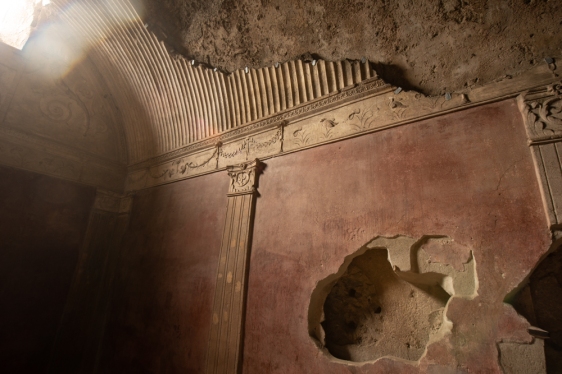 Some of the plaster decoration is still visible in the women’s bathhouse.

This is the brothel. It was just slightly off the main road. Since Pompeii had a very active port this placement is both just a little hidden from view and easy to find for sailors coming up from the docks.

The women’s bathhouse had a cool bathing pool as well as a warn one.

This is a counter top in a shop. The two holes most likely held hot soups.

The details on these shocked me.

Some of the roads we traveled up to get to Vesuvius