I checked out Bright Light Social Hour at Motr a few weeks ago. They put up a good show at Bunbury 2013. The close atmosphere of Motr suits this band. They tore through their set. When they returned for an encore, they dropped their made for radio, pop influenced rock and rolled into a blues inspired jam session. The energy shifted in the room, while the band morphed into their most true selves. 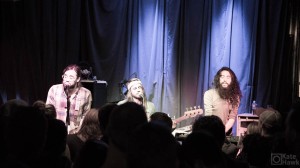 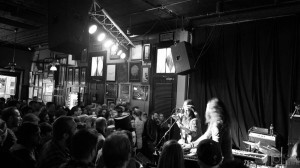 A couple of weeks later I saw San Fermin at The Woodward Theater. The venue just opened in early November. I was excited to see my first show there. The venue is significantly larger than Motr, with more stage and floor space as well as a wrap-around balcony. The space reminds me of the old Southgate House ballroom, but deeper and more narrow.

The venue is spacious and painfully clean. The stage is raised enough that at the back of the crowd, people on stage are visible. The balcony provides excellent vantage points, while still feeling intimate. I will gladly return.

I wasn’t sure what to expect with San Fermin. I caught 5 minutes of their packed MPMF 2013 show. There was barely room to move in The Know Theater. At the time, there were about 8 people in the band, complete with a bari saxophone player and a trumpet player.

But technically, San Fermin is a composer, and it isn’t clear if he tours with the same musicians. He could turn up with a drummer and a vocalist or with a full band. I didn’t see any horns on the stage at The Woodward; my anxiety grew.

When they hit the stage, I was delighted to see the full band. The stage was set with mic stands topped with retro light bulbs. The bulbs fluctuated in intensity with the music. When they would hit creshendos the stage was awash in light that contrasted beautifully with the band’s dark attire. The lighting was a simple but delightful addition to the show.

Ah, and the sound. They sounded excellent. The acoustic sound of the drums was a little promenant from my balcony position. I hope The Woodward suspends the speaker stacks in the near future. I think that would solve the problem, as the sound from the floor was balanced.

The Woodward Theater is a stellar addition to Cincinnati music venues. San Fermin performed with excellence. Bright Light Social Hour is a jam band dressed up like pop. Cincinnati has a great music scene. The end.