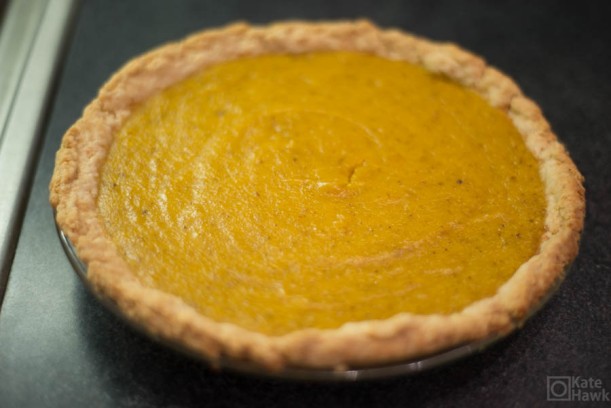 I have been trying out vegan recipes. I am curious about how you replace stuff like eggs in baked goods. Rather than screw around with a garden variety brownie, I went straight for the dairy holy mother of desserts. Custard. I opted for pumpkin pie. Pumpkin pie filling is basically custard… with pumpkin in it.

Technically, I made a cushaw pie. I happened to have pureed and drained cushaw; cushaw is also a winter squash. It doesn’t exactly taste like pumpkin, but it has a flavor that plants it clearly in the gourd family. It’s flavor is more mild than pumpkin or butternut squash. It’s most defining taste is that of creaminess.

I used this vegan recipe, except I used cushaw puree spiced with nutmeg and allspice. Basically the recipe replaces the eggs and evaporated milk or cream with cashew cream. The cashew cream was easy to make, and whipping up this pie filling was really simple. The batter was considerably thicker than pumpkin pie filling.

The pie came out of the oven looking good. My partner said it tasted better than the cushaw pie that I made with dairy. The filling set-up well. The spices and flavors were good. But something was missing.

Relevant detail. I LOVE CUSTARD. There is no greater blaspheme than putting harsh vanilla extract in vanilla custard or crème brulee. When I order crème brulee, while I am rarely disappointed, I often think I could have made better. At the root of my devotion to custard, is pumpkin pie. I didn’t understand why pumpkin pie was my favorite type of pie until I understood it as a pumpkin custard.

The context has been established; I am a custard nut. If I had ethical or dietary constraints around avoiding dairy this pie would be a fine substitute. It’s good. But as a custard nut, I found it lacking. First, the texture of the pie was considerably more dense than its eggy counterpart. In addition, it was missing the subtle richness that only egg yolk can impart. Do you love a vegan? Make them this pie. Do you have no ethical or dietary issues preventing you from consuming eggs? Use the eggs and make custard with all it’s egg and whipping cream goodness.