I bought a couple of cushaws a week ago. I had one last year, and attempted it as a substitute for pumpkin. That yielded mixed results. I liked the flavor of the squash enough to give it another try this year. This year I looked up recipes that called specifically for cushaw. I just realized that I was struggling with whether cushaw should be singular or plural. The cushaws I got were enormous, so all my recipes only called for part of a cushaw, so I will stick with the singular as is often used for another large gourd, butternut squash. 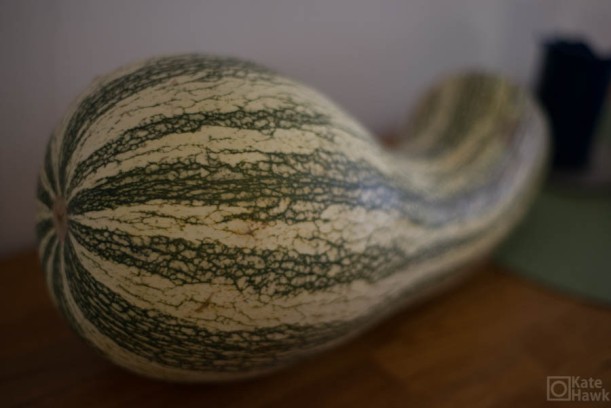 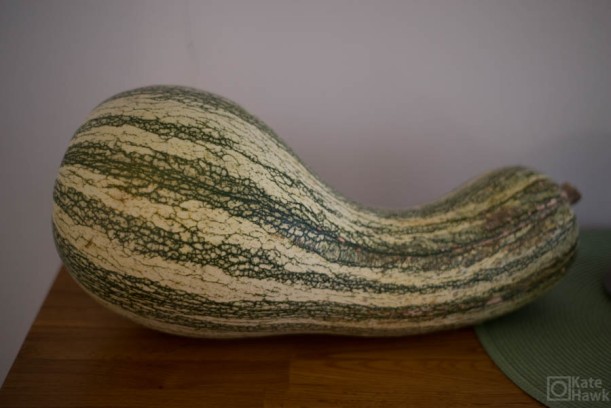 I wasn’t sure how all these foods would mix together, but they turned out a delicious fall veggie-friendly, Southern-inspired meal that went perfect with blogging and watching football. I whipped up the following:

Pinto beans flavored with cloves and cinnamon
Buttermilk Cornbread
Beet greens
Roasted spiced cushaw (This wasn’t complicated enough to require a recipe, I will explain what I did below.)
Cushaw pie for dessert

For the most part I followed the recipes listed above. Here’s where I went rogue. I used dried pinto beans as opposed to canned kidney beans. I cooked the pinto beans in my last jar of homemade veggie broth. When they finished cooking, I held the broth aside and then used that instead of the water that the recipe calls for. I also only had about 3 cups of cooked beans, which was slightly less than the 3 and 1/2 cups that would have come from to cans of beans. I cut the cinnamon and clove by half. I cut this back because I wanted the flavor to be subtle. Plus, I knew I could always add more if desired. Cutting back the cinnamon and clove turned out to be an excellent idea. I used some of the heirloom tomatoes that I canned this summer in the recipe as opposed to store-bought canned tomatoes. My tomatoes were packed with garlic cloves, so that probably amped up the garlic flavor of my beans. 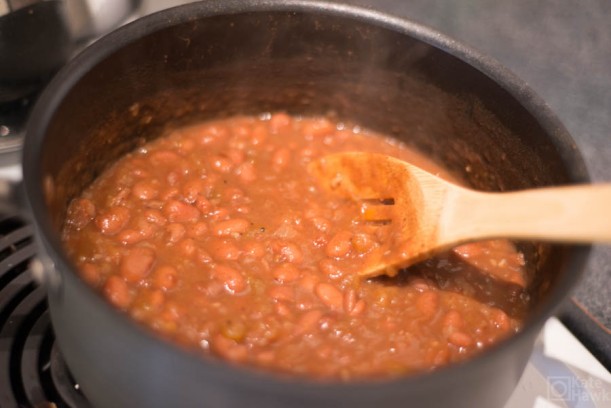 The pinto beans in the pot. I think this is the best way I have ever had pinto beans prepared.

For the beet greens, I didn’t use bacon. I used canola oil to caramelize the onions, and then added a bit of Bragg’s Amino Acids. The bacon should add umami and salt, and Bragg’s is a pretty good veggie substitute for both of these flavors. I also didn’t have a full lb of beet greens, so I cut back the rest of the ingredients to compensate.

The roasted spiced cushaw wasn’t complicated. I just cubed the cushaw and tossed it with butter brown sugar and Saigon cinnamon. I measured nothing. I will say this, cushaw has a very delicate flavor, so cinnamon can overwhelm it quickly. I really just put a couple of dashes of it on the whole pan of cushaw. I roasted the cushaw at 400 degrees until it was easily mashed with a fork. Otherwise I followed the other recipes.

I was pleasantly surprised with my feast. All of the flavors of the meal worked really well together. The greens were salty and acidic. The beans were rich and savory. The roast cushaw was sweet and creamy. Everything tasted wonderful on it’s own, and each dish complimented the other. I think the sum of the meal was greater than any of the parts on their own.

The cushaw pie was delicious. I really enjoyed that the recipe didn’t have cinnamon. The nutmeg and allspice made the pie taste more decadent than a standard pumpkin pie. It’s also different enough from pumpkin pie, that it would make a nice alternative for a Christmas pie once everyone has had their fill of pumpkin at Thanksgiving.

I’ve heard rumors that a gourd exists that would taste better in pumpkin pie than pumpkin. I’ve heard these rumors for some years. As described in an earlier blog post, I’ve established a fledgling relationship with a few farmers at the Lunken Farmers Market. They are crusty old men who seem to grow the food they are selling, no wholesalers here. When I picked up 9 pumpkins for canning, one of the old curmudgeons pointed to a very large green and white gourd and asked if I’ve ever made a pie with one. Pretentiousness is pointless with curmudgeon, so admitted that I’d never seen one of those before. As soon as he said that it would make a better pumpkin pie than pumpkin, I knew a new cooking adventure must happen.

The gourd in question is called a cushaw; it’s a winter squash. The internets tells me they are more common in the south. I don’t know how these turned up in Cincinnati. Geographically speaking, calling Cincinnati part of The South is nonsense. If you want to read a bit more about cushaws try this blog out. 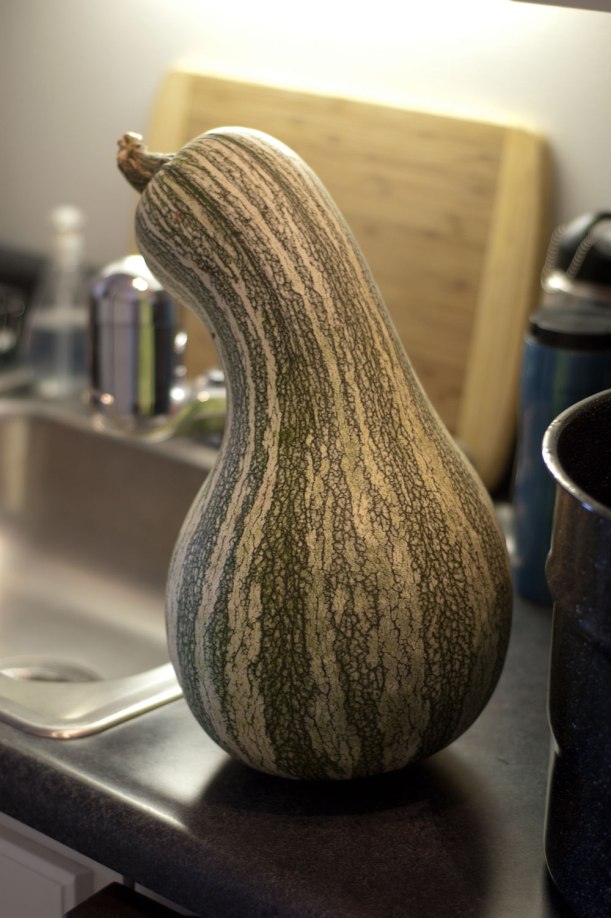 The cushaw before I started hacking away at it.

If you have ever engaged in the laborious process of getting pumpkin puree out of a fresh pumpkin, you know that only an intense love of pumpkin can drive you to such lengths. The cushaw has one obvious and one not so obvious advantage over pumpkins in terms of getting them to an edible status. The cushaw’s shape and structure matches that of a butternut squash; so gourd for gourd the cushaw is going to yield considerably more puree than a pumpkin due to the cushaw’s seed cavity taking up considerably less volume. The not so obvious advantage is that the cushaw was much easier to cut through than pumpkin. My cushaw was about 16 inches tall and 10 inches in diameter at its widest. I had visions of getting out my Dewalt reciprocating saw to hack that thing apart. I was pleasantly surprised to find it quite easy to cut through. Cushaw FTW in prep round. 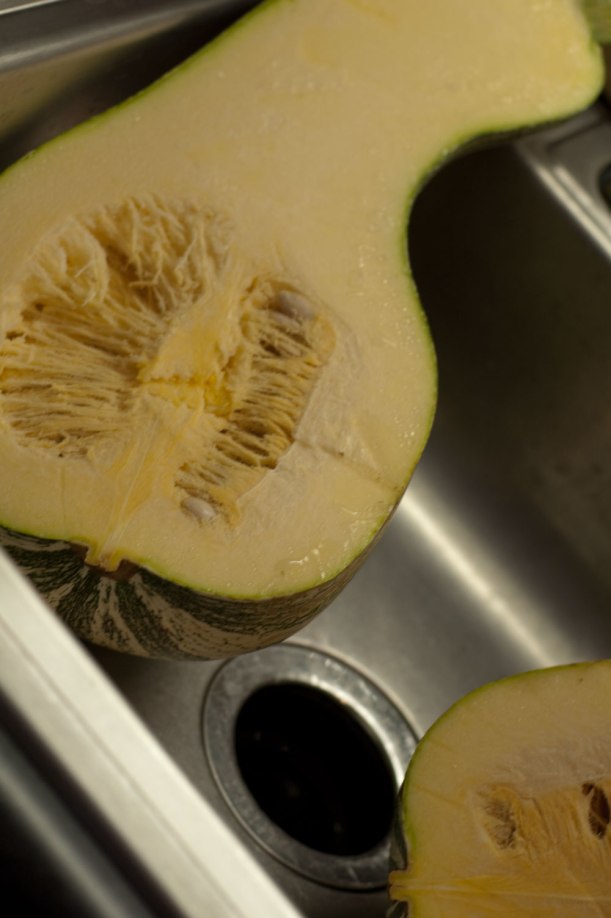 The cushaw with seeds intact.

I split the cushaw. I scraped out the seeds. I put them cut side down on cookie sheets with a bit of olive oil to prevent sticking. I roasted them in the oven on 350 for a little over 1 hour. We scraped out the pulp and ran it through the food processor. Oops. I skipped the part where I ate forkfuls of the pulp out of the roasted gourd, still seaming from the oven. I also skipped the part where we spooned the puree into our mouths. This gourd is tasty. This gourd is tasty without additional embellishments, like pie crusts or cinnamon.

My writing skills are not quite up to the task of describing how cushaw is different from butternut squash or pumpkin. Cushaw is creamy but more neutral in flavor than pumpkin, acorn, or butternut squash. Whipping cream doesn’t so much have a flavor as it has a mouth-feel. Cushaw has a similar effect. It’s not as sweet as pumpkin, and it’s lacking that distinctive pumpkin flavor. This gourd is a little more like a blank canvas that will reflect the ingredients you pair it with. A creamy canvas.

The puree that didn’t make it to my belly went into three recipes. I used recipes that I have made many times with pumpkin. I felt like this would be the most direct comparison.

The pie was excellent. It turned out a delicate custard. It was rich without being overwhelming. It completely lacked that mealy quality that canned pumpkin pies typically have.

Here’s what the pies looked like right out of the oven.

The pumpkin bread was interesting. Because the cushaw lacks pumpkin flavor, the bread tasted more like chai spice bread than pumpkin bread only with the same dense, rich texture that squashes add to breads. This recipe was excellent, although, if you are jonesing for pumpkin bread, I don’t think this bread will satisfy your desire.

The pumpkin roll was tricky. I think the recipe should have been amended such that the cake stayed in the oven a bit longer. The cushaw seemed to make the cake stickier than it turns out with canned pumpkin. So, the pumpkin rolls turned out pretty ugly. But for what they lacked in beauty, they made up for in taste. Longer cooking time, and maybe draining the cushaw would have helped this recipe out a bit.

The verdict is that the pie was better. The roll and the bread were good, but I wouldn’t say they directly compete with pumpkin. I feel like they were more like new recipes with cushaw in them as opposed to subtly different forms of their pumpkin counterparts.