I have been canning for a few years. I knew this day would come. I bought a pressure canner. Pumpkin is what sealed this deal. Stocks and meats just don’t excite me like pumpkin. When faced with the possibility of using that sad, metallic-tasting paste that comes out of a can for another year, I went to the internets in search of pressure canners.

This was our most ambitious canning session to date. We planned to can a couple of varieties of apple sauce, apple butter, pumpkin butter, and pumpkin cubes. Note that we chose to can cubes because it’s not advisable to can pumpkin puree at home. The cubes will just need to be run through my food processor before they are added to my favorite recipes.

We started off with a half bushel of apples and nine pumpkins. Here’s the recipes/instructions for what we did.

Here’s the apples when we were cooking them down. After this we put the apples through a food mill. We brought the resulting sauce back to boiling before canning it.

Here’s the apples after we processed about half of them.

Apple sauce: http://www.freshpreserving.com/recipe.aspx?r=126 (we made half the batch plain as instructed here except with less sugar. We got golden delicious apples, and they were pretty sweet without the sugar. We made the other half the batch with cinnamon and vanilla bean w/ seeds.

Here’s the random things that we learned. I think we accidentally put 2 tsps of nutmeg in the pumpkin butter as opposed to the 1 tsp that the recipe called for. Two tsps is great if you want the nutmeg to overwhelm all the other flavors including the pumpkin. (FAIL) The pumpkin butter thickened really quickly on the stove. I don’t think we cooked it for more than 20 minutes, and in that time the concoction got much darker and thicker. 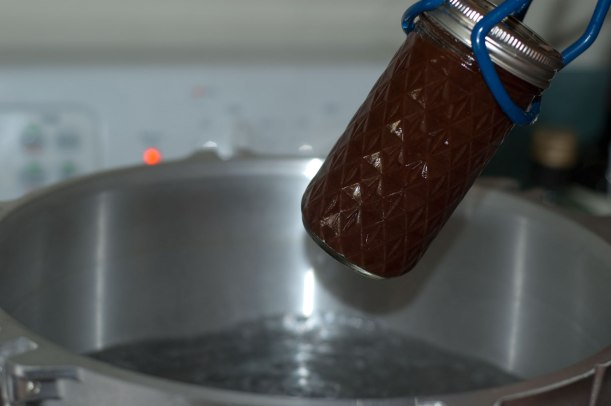 Here’s a jar of apple butter coming out of the pot after processing.

The apple sauce was excellent. It was so excellent that we needed to stop ourselves from eating it before it made to the jars. If we do another fall canning session, it will be to do more apple sauce.

The pumpkin that we canned bears almost no resemblance to what comes out of store-bought cans. The color is a bright yellow and the flavor is closer to acorn or butternut squash. This made me wonder what they do to the pumpkin to get it that color and to get that mealy flavor. I don’t know if you have ever eaten a spoonful of pumpkin from the can, but it has that non-taste that commercial baby food often has. The pumpkin that we put in the jars had this slightly sweet, creamy flavor.

I mentioned in a past blog that I get my produce for canning at the Lunken Airport farmers market (if you aren’t from Cincinnati just ignore that last sentence). The people who go there aren’t wholesalers; they are the actual farmers. For what they may lack in customer service skills, they more than make up for it with knowledge about the produce. The old curmudgeon farmer that I work with most often, while doubtful of my intentions at first, has now warmed to my tattooed self. It seems like I keep clearing hurdles with him. On my pumpkin purchase, he seemed pleased that I recognized the pie pumpkins from the mess of decorative gourds and pumpkins.

While we were bagging up my pumpkins he pointed to a huge green and white mottled gourd. He asked if I had ever made pie with one of those. I said no, because I had never seen this type of gourd before. He pushed his vintage (NOT RETRO) John Deere hat further back on his head and said, “Once you make pie with one of those, you’ll never want a pumpkin again.” I have heard of a gourd that is fabled to be more tasty than pumpkin. I’m pretty sure curmudgeon farmer just pointed out my gourd Moby Dick. Needless to say I will be going back next week to get one of those gourds. Be on the look out for the Moby Dick gourd blog post next week.