We are getting good at this canning stuff. Since nature doesn’t acquiesce to my timelines, I got a bushel and a half of peaches and a bushel of tomatoes in the same weekend. That’s a lot of food to can. It was my preference to do the peaches one weekend and the tomatoes the following. However, the old curmudgeons told me upon picking up my peaches that canning tomatoes could arrive the following day.

Their canning tomatoes are only 10 bucks a half bushel, so I couldn’t really say no without kicking myself in the wallet. There’s no better price out there for fresh tomatoes. I’m a sucker for a good deal.

We had to act quickly. The peaches were ripe, and would devolve into moldy mess in a matter of a few days. The tomatoes, being canning tomatoes, had blemishes on them. Those blemishes can turn into a moldy mess too. We chose to can the peaches first, as just the weight of them in the half bushel baskets could cause bruises and hasten molding.

We canned several varities: bourbon peaches, vanilla peaches, tea infused peaches, spiced peaches, and bourbon spiced peaches. We learned from our mistakes last year. We put the spices directly in the jars last year. This had two effects. First, the flavors were inconsistent. One jar tasted like star anise while the next tasted like cardamom. Plus, the woody spices (the star anise and cinnamon) got an increasingly bitter taste to them the longer the peaches aged in the jar. Notable exception, vanilla only continued to taste better and better as it aged in the jars.

To correct for this problem, we infused the simple syrup with the woody spices, and placed the vanilla in the jars. Time will tell how well this new process will work out. Without question this should solve for the inconsistency in flavor. It’s hard telling how the peaches spiced in this way will age. I will tell you in 2015.

It took a nine hour marathon canning session to work through only two thirds of the peaches. We wearily gave up, partially because we ran out of jars and partially because we were dead on our feet. I got a very early start on Sunday. I was hoping to make our second day canning shorter than the prior. But given that we weren’t halfway through our produce, I wasn’t feeling terribly optimistic.

I started the day finishing the remaining half bushel of peaches. After digging through my jars, I was able to scrounge up enough of them to leave only enough peaches for a pie. By the time Ali arrived with more jars, I was processing the last of the peaches, praise be the gods of sticky simple syrup and having a closet full of mason jars.

Ali arrived around ten, and we started on the tomatoes. Our typical pattern is for Ali to blanch the produce and handle jar packing and processing while I skin and prep the fruit for the jars. Our roles got reversed somehow. There was a plausible reason for this at the time, but I don’t recall it. We packed all the tomatoes in boiling water with about a teaspoon of kosher salt, a tablespoon of lemon juice, and a sprig each of fresh rosemary, thyme, and oregano. We followed a similar process last year, and the resulting tomatoes were lovely in marinara or a tomato soup.

I don’t know how it happened. All I know is we were done processing those tomatoes by 2pm. There were four things that were a bit different about the tomatoes. The tomatoes didn’t require packing in simple syrups. We just had to have steady supply of boiling water, nor did they need to be sliced as the peaches did. All of the tomatoes were put in quart jars, while some of the peaches went it smaller jars. Finally, I was the packer/processor, while Ali was the produce peeler. I don’t know how anyone of those things contributed to us finishing so quickly, but I was grateful for it.

We learned some things. First, we noticed that a half bushel of produce will fill a case of quart jars. So, you can do some math around that and calculate how many smaller sized jars you might need. We also learned that my pot’s maximum jar capacity is 6 quart jars at a time. Finally, we learned that canning two and half bushels of produce in one weekend is too much. Finally, peach pie made with fresh fruit is amazing!!

Next up on the canning schedule? We might make some tomato paste this weekend. Plus, we will be canning pumpkin, apples, and perhaps cushaw this fall.

Half bushel of peaches. 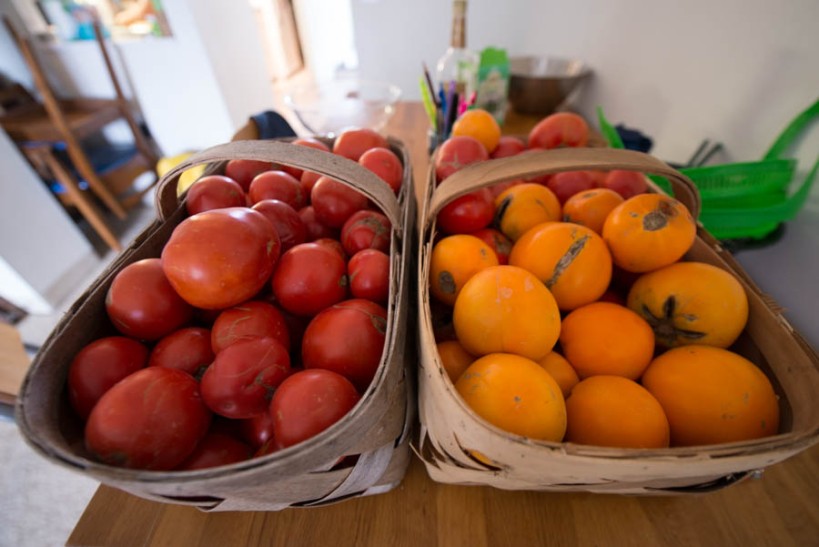 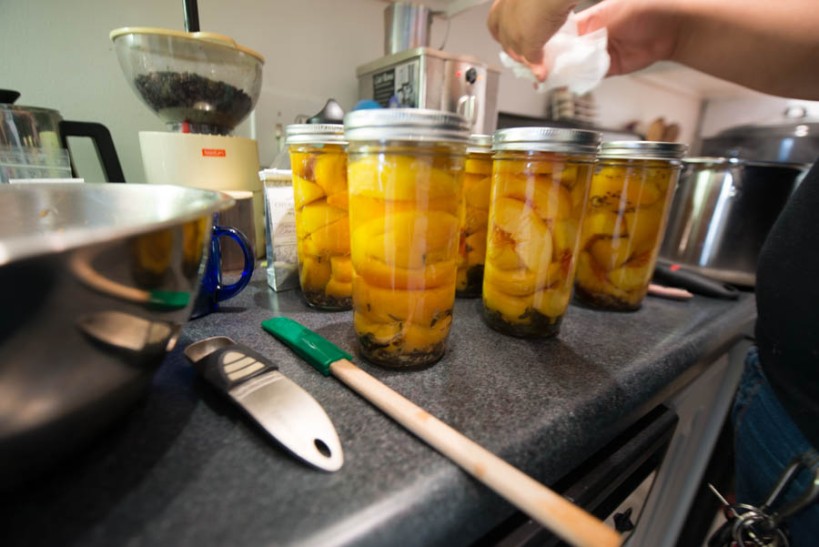 So many peaches. These are the peaches that were packed in tea.