After weeks of searching we finally found rhubarb. I talk about my hunt for it here. Our plan was to make the following recipes. 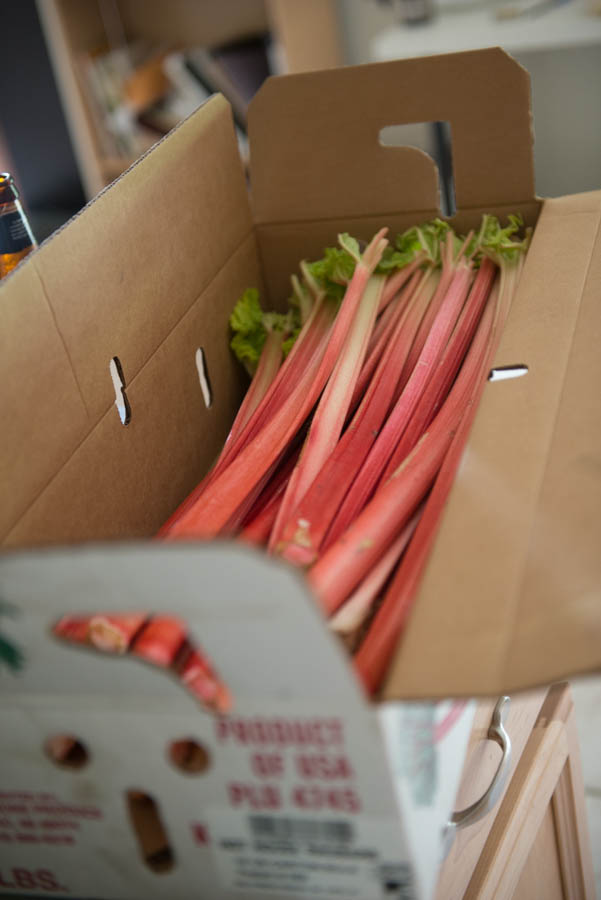 This is what ten pounds of rhubarb looks like.

We started out with ten pounds of rhubarb. We probably had about three pounds left after making a double batch of jam and single batches of everything else listed above. 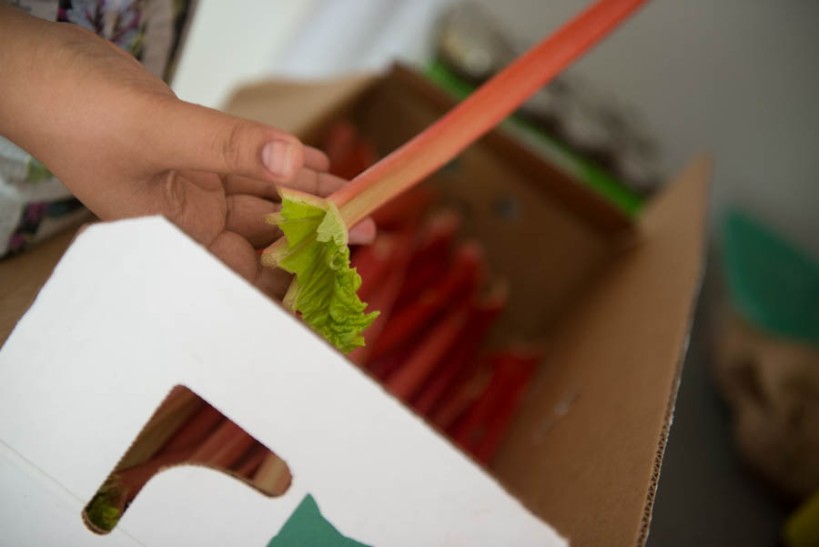 I made the muffins a few days before everything else. Putting them together was pretty easy. Since I cook and bake quite a bit, I had nearly all the ingredients in my kitchen. I had to make a trip to pick-up sour cream and a fresh lemon for the zest. These muffins were spectacular. The streusel with fresh lemon zest and almond extract was outstanding. The muffins were tender and only slightly sweet, and the bits of rhubarb added just a bit of zip to each bite.

Rhubarb jam prior to cooking

We put the jam in the slow cooker to leave more space around the stove top. After some hours on high with no signs of boiling, we transferred it to the stove. I’m not sure why the slow cooker wasn’t able to bring it to a simmer. Perhaps all the fiber and pectin in the rhubarb? We don’t know. Once the jam came to boiling, it thickened right up. We sanitized lids and jars, and filled them with the jam. Then we canned them in a traditional water bath. We finished with the jam after a long day of cooking. I was too exhausted to taste it before we canned it. I will come back and comment on how well it turned out after I open the first jar. 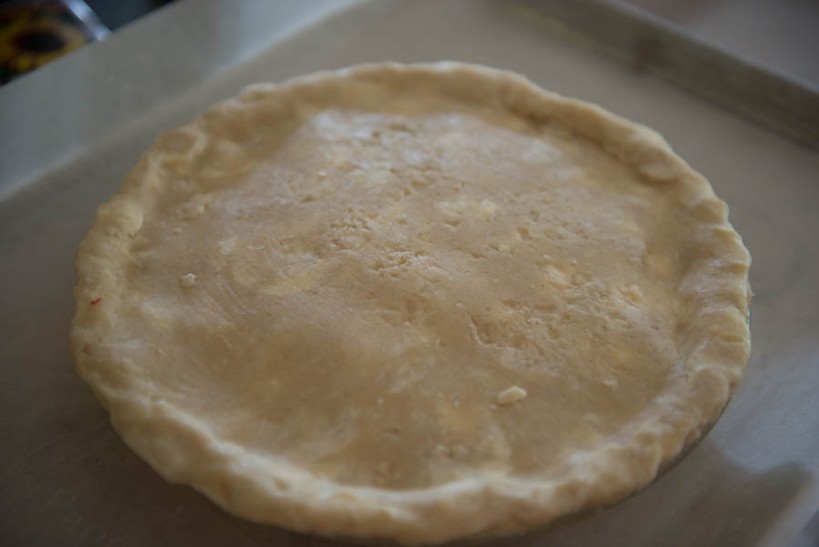 I mastered the difficult art of making pie crust. Making a vegan crust was a new challenge for me. I had two concerns about the vegan pie crust recipe that I linked to above. There are two things that I know about consistently making excellent pie crust. Rule number 1: if the dough is easy to roll out you have without question added way too much water. Rule number 2: the dough needs to be as cold as possible all the time. The vegan recipe above breaks rule number one egregiously. I know the point of adding the vodka is so that it evaporates and leaves you with less moisture in the finished crust than only water would. But my no-fail non-vegan recipe only calls for 3 tbs of water against the 1/4 cup of water in the recipe above. And then you add an additional 3 tbs of vodka. I used half as much vodka and water in my dough than what the recipe called for.

Second issue I had with the recipe was the fat to flour ratio. As compared to my usual recipe, there was about 1/2 a cup more fat. I decided to follow the recipe here. I was thinking that perhaps the vegan butter had more water in it than butter, and hence required a higher fat to flour ratio. You will have to keep reading to find out how it turned out. 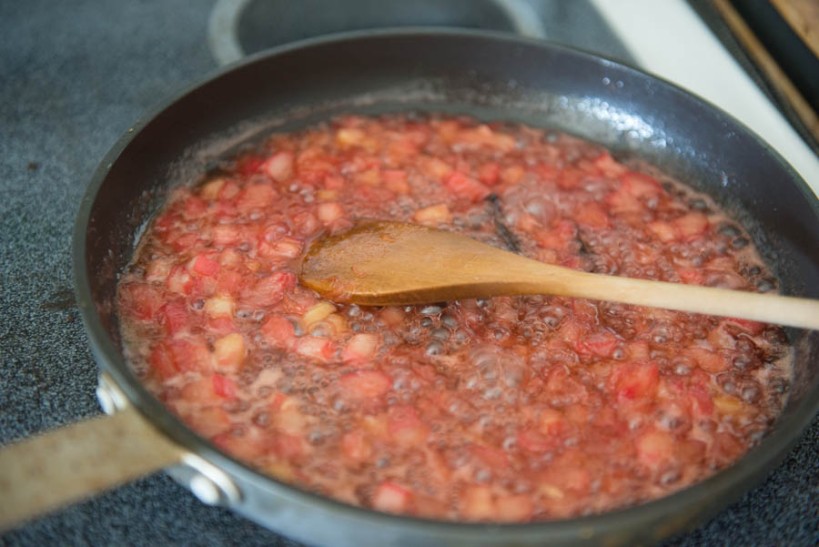 Here’s the rhubarb that ended up in the rhubarb upside down cake, while it was being caramelized.

Tempeh and Tofu after the marinade.

For the reubens, we used marinated tempeh and tofu. We just sliced both of them up and let them marinade. After they soaked up some flavor, they went into the oven on a baking sheet to get a little texture to them. I also made a vegan 1000 island dressing for the reubens. I used the silken tofu recipe here. I whipped this up in the food processor. The resulting mayo was pretty good. It was a bit more runny than regular mayo, and I could taste the missing egg yolk. But I don’t think anyone would notice the difference once spread on a sandwich. I added the relish and ketchup to taste and didn’t follow any recipe. 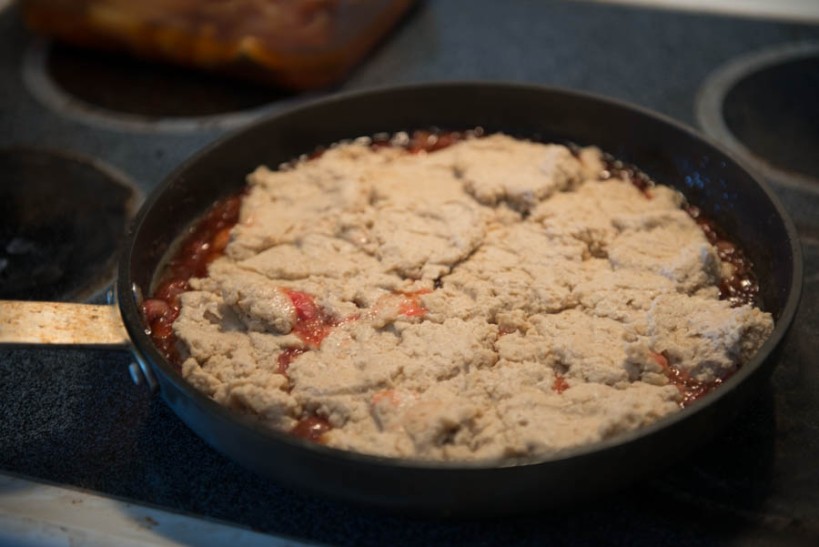 The rhubarb upside down cake was not sweet. It was more like a biscuit with caramelized rhubarb on top. In fact, it would almost be a savory dish. I was expecting something sweet so I was a little put off with it at first bite. Once I realigned my expectations, I thought we made a damn good vegan biscuit. Would I make this again? Probably not. It wasn’t bad, but plain old biscuits would have suited me just as well and are less work. The flax eggs made the biscuit taste like it was made with some whole wheat flour. I don’t know that flax eggs would work in most other sweet pastry settings, but it was excellent for this savory biscuit.

The braised rhubarb was weird. It was extremely tart. Tart, I could have lived with, but the texture of the rhubarb was not to my liking. Cooked celery keeps it’s body, unless you cook it for ages. The rhubarb managed to be completely limp and stringy all at the same time. I don’t know how else to put this, but the texture just wasn’t for me. The flavor of the spices was nice. The tartness I could live with. Limp and stringy, I cannot.

The two biggest successes were with the reubens and the vegan rhubarb pie. I’ve learned that for me, the critical reuben components are sour kraut, 1000 dressing, and excellent bread. The other ingredients don’t make or break the sandwich. The tempeh and tofu were good, but they didn’t stand out. The vegan 1000 island dressing was excellent. We ran out of the reubens. I now know that my craving for reubens can be met without out eating any animal products.

The pie was spectacular. The crust turned out wonderfully. It was flaky and yet held it’s shape when sliced. We were only left with three pieces for Ali and I to share. I thought I was going to have to fight Jenn for the piece and a half that I brought home.

Here’s what I learned about vegan cooking and baking. It’s not that hard. In fact, I think it would be a lot easier to cook and bake vegan at home that it would be to eat out. I liked it so much that I might start making my own vegan butter and working that in to my cooking from this point forward. This will be the first of many adventures.