NOTE: Readers who aren’t familiar with Cincinnati. This blog is going to be about the neighborhood that I’ve spent the most time in. The neighborhood is called Over the Rhine, or OTR for short. It is just north of the downtown business district. It was blighted for the first 10 years that I lived here. There has been a renaissance in the last 8 years. It has the largest collection of intact 19th century urban architecture in the country. It was allowed to rot from 1970’s until just 8 years ago. For more on this neighborhood and current events read this: https://allthenamesaretakensothisisreallyreallylong.wordpress.com/2013/11/13/a-streetcar-named-wtf/

I lived in Over the Rhine when it was blighted. I lived there when the streets were lined with boarded-up buildings. I lived on the corner of 13th and Jackson 2003-2005. Here’s what isn’t obvious about that place in that time. There was a real community there. The people who chose this place as their home were grounded and real. While they were unconventional makers and builders. They were artists, musicians, entrepreneurs, and chefs. There’s something that makes all posturing and pretense melt away when, the only thing that’s standing between you and a random act of violence is the vigilance of the people who live on your street.

Many things have changed since 2005. Most notably, OTR has been gentrified and is considerably more expensive to live in. The crappy corner bar with 2 dollar Jim Beams has been replaced with a craft beer bar with drinks at 10 dollars each. Rentals have given way to condos. Condos start at $250,000 for a very small two bedroom without parking. My 1200 sqft 2 story loft with 1.5 baths was a mere $650 a month in 2005. I’m sure that rent as at least doubled.

These changes have brought much-needed money to the neighborhood to spur development. And for the most part, I am happy for it. Although, these changes have by their nature changed my neighborhood. I don’t say hi to the drug dealers anymore. Instead I see lots of runners; a rarity in the past. The bars and eateries that I used to walk into and sit immediately are often on a 2 hour wait. But I’ve been wondering, how much has the community changed? Are there still great artists, makers, and bartenders living there?

I got my answer on Friday. Cincinnati shuts down in snow storms. Friday was no exception. Since I live within walking distance, I headed to OTR. I knew that the bars would be filled with locals, or people who could walk to their destinations. Suburbanites in Cincinnati would not leave their homes in this kind of weather.

I headed to The Drinkery. When I walked in, the nine strangers at the bar cheered and gave me high-fives. Apparently, people who go out in that weather appreciate others who do the same. My friend texted and let me know that she was across the street at Cincy by the Slice. Since they were pretty slow, we bonded with the staff over bad dating website pictures. One of the pictures features a recorder, a box of wine, a fire on a laptop screen, no shirt, and an animal skin rug; this picture is magnificently bad.

We headed outside into a snowball fight. This was cut short by the fact that our primary opponent lacked gloves. In The Drinkery, we found that the bartenders were well lubricated and chatty. At some point, we found ourselves outside with a bartender singing James Brown with Kevin the Poet. See the video below for an understanding of who Kevin the poet is.

After too many dollar Ancient Ancient Ages, we headed to Japps. It was at this location that I saw twerking for the first time. It just so happened that an Asian man jumped out of the DJ box and lead my friend to the dance floor. A few moments later, this man was twerking so aggressively on my friend that she nearly fell over. I can’t express how pleased I am that, my first twerking experience was with a gay man going for a ridiculous score of 11 out of 10.

After some less than graceful dancing (note: that is only in reference to my rhythmically challenged ass and not my friend’s), we needed some pizza to soak up the booze. We returned to Cincy by the Slice and ordered a pepperoni pizza. In the short time that we waited for pizza, we were joined by 6 or so people. They missed the cutoff for pizza, so we shared ours. Then we had a dance party with the staff at Cincy by the Slice to Missy Elliot.

This night was so fun. This night was filled with lots of great people. There weren’t any weird come-ons. There weren’t any douche bags. It has convinced me that the people who choose to live in OTR are still fantastic. The rents have gone up. The booze is more expensive, but the people who choose to call that place home? They are exactly as awesome as they were a decade ago.

This is a shot of 12th and Vine facing West. 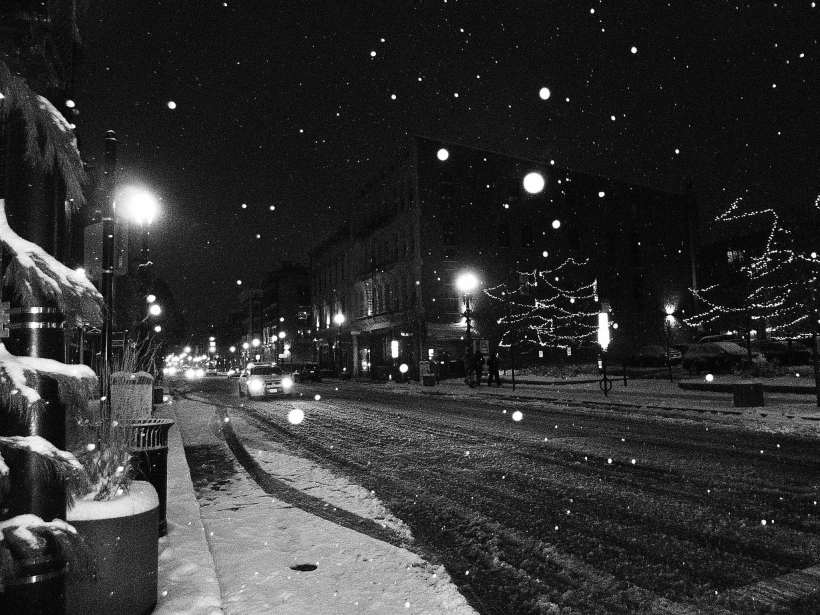 This is looking north on Vine street.

This is outside The Ensemble Theater. I don’t know why I liked seeing the snow lit-up from behind.

Looking north at the cornder of Central Parkway and Vine.

One thought on “The Place I Call Home”