Neither of my grandmothers cooked much with processed/packaged foods; this is more to do with their age than an ideology. I canned jams and jellies with my dad’s mom until I was school-aged. I grew up eating homemade breads, jellies, jams, and assorted baked goods. It made me picky. I started making my own jams because I grew dissatisfied with store-bought. This little taste of canning made me bold.

A good friend and I got a basket of South Carolina peaches, a mess of jars, and an assortment of spices. We were unsure how well any of this was going to work. Here’s what we started with. 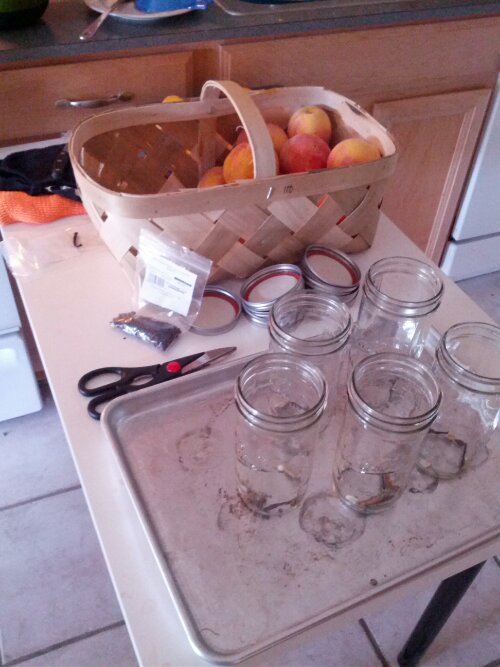 Here’s the peaches and jars. That basket was full. We where half way done with processing them at the moment that I snapped this picture.

A few tablespoons of lemon juice

A bottle of bourbon (Ancient Age)

I’m going to break this up into 4 functional groups. Bear in mind that at any given point in the canning process we probably had jars in all functional states. This is critical to understanding how we managed to do this in about 4 hours.

The first step in the process is making sure your jars are sanitary and ready for fruit. In our past jamming sessions we let the jars boil in water for several minutes to kill the microscopic critters. After some internet searching, we found that you can also put the glass jars in the oven for 20 minutes at 250 degrees. We used the oven technique for our peach jars, partially because the jars a bigger would be more difficult to manage in a pot of boiling water. This also freed-up an all-important heating element on the stove. We sanitized our rings and lids in boiling water.

To skin the peaches, we dropped them in boiling water for about 2 minutes. Then we put them in an ice bath for a minute. This allowed easy removal of the skins. This was probably the most laborious part of the process.

We threw the desired spices in the bottom of the jars first. We did a mix of plain vanilla, plain cinnamon, and mixed spices. The jars got roughly one quarter of a vanilla bean, a once inch cinnamon stick, a couple of slightly crushed cardamom pods, and one star anise. We hand packed the peaches in the jars over the spices. Then we poured very hot simple syrup (one quarter sugar to three quarters water) over the peaches. We added 2 tablespoons of bourbon to the jars as desired. We put Indian traditional chai tea in one of the jars, and we put green passion fruit tea in the other. Picture below. 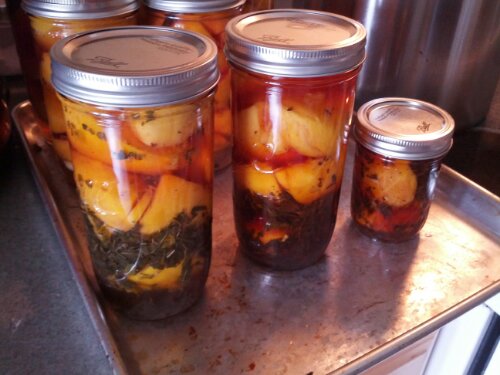 We aren’t sure how the peaches will do with the tea. We have already agreed that we both must be present when the peaches are sampled.

We put the jars in boiling water for 20 minutes. About 9 out of 10 jars came out and sealed nicely. There were a handful that we need to put back in to get them to seal.

I had only eaten commercially canned peaches prior to opening a jar of ours. Eating those peaches was life-altering. Not only do I not understand why no one has commercially canned peaches with some of the spices we used, but I also don’t understand why more people aren’t canning their own peaches. My god. Those were absolutely delicious. I’m ruined for peaches in heavy syrup forever. The simple syrup we used was enough to make the peaches sweet, but not overwhelming. The sugar just complements the flavor of the fruit as opposed to drowning it. I suspect one of the reasons the sweetness in our peaches wasn’t as cloying as commercially canned peaches might be that we used cane sugar as opposed to the high fructose corn syrup.

Some of my friends have offered me money for a jar of our peaches. I am typically generous with our jams. But the peaches. I don’t think I can part with the peaches. My parents will be lucky to get any of the peaches.

Update: we opened the peaches that we packed with tea. They were delicious! We ate them with some homemade vanilla custard. It was divine.

One thought on “Adventures in Cooking: Canning Peaches”