I’m taking a break from books for this post. Bunbury happened a little over a week ago. I went. I had the most rock and roll experience in recent memory. Here’s what happened.

I live within walking distance of the park in which Bunbury takes place. I have been to other music festivals, Lollapalooza and multiple Warped Tours. I jumped at the chance to attend a festival that wouldn’t require travel and lodging, even with a line-up that wasn’t wholly in line with my tastes.

Bunbury distinguished itself from other fests by supplying free water and misting stations as well as abundant beer booths-including craft beers, local food vendors, shady napping spots, porta johns, and cell charging stations. In addition, the organizers had the forethought to issue color coaded wrist bands that indicated both what type of pass you purchased, but also your over/under 21 status, allowing you to leave your id at home once you’ve picked up your wrist band.

Bunbury 2012 was so enjoyable that I purchased VIP tickets for Bunbury 2013 without a single band announced and zero information on the VIP amenities. The VIP three day pass was $295 as opposed to $90 for the standard three day pass, so it felt like a risky decision at the time. I was not disappointed.

Before I get into the specifics of the shows, the VIP tickets were well worth it. First, there was a generous area sectioned off in front of the main stage, enabling me to walk to the front of any of the headliner shows. In addition, there were intimate shows in the air-conditioned VIP tent, after which the band members chatted, took photos, and signed autographs. The drink specials in the VIP tent included dollar water and sodas, 2 dollar beers and malt beverages, and 3 dollar wine and mixed drinks as well as free Street Pops (yum!) and free food around dinner time. Considering beers outside the VIP tent were 6 or 7 dollars, I estimate that the VIP tix saved me 100 or 150 dollars in food and drink for the weekend. To top it all off, the musicans cycled in and out of the VIP area, Brent Dressner from The National for example. This is where I ran into one of the guys from CAKE, who complemented by tattoo. Oh, and Peeta from the Hunger Games movies was back there.

Now then, these are the bands that I saw, followed by my abbreviated highlights and, in some cases, lowlights.

Friday: The Features, American Authors, Delta Rae, Tegan and Sara, Sky Ferreira, Walk the Moon, DeVotchKa, fun.
My thoughts: stand out shows were Walk the Moon for being adorably proud to be playing to their home town and DeVotchKa for being one of the best performance bands ever. Random discovery: Tegan and Sara are tiny women. If there was such a thing as pocket lesbians, they would be it.

Seriously. They are tiny, tiny women.

Saturday: Margaret Darling, Vacationer, Bears of Blue River, Taylor Alexander, Chairlift, Twenty One Pilots, Black Owls, We Are Scientists, CAKE, Atlas Genius, MGMT
My thoughts: Atlas Genius sounded excellent. Their show sounded almost exactly like their record; not a single note was missed plus loads of energy. Without question I will be getting tickets to see them when they come back in the fall. The Black Owls and CAKE sounded incredible. The guys in those bands appeared to be in their 40’s or 50’s and have the confidence and skills of seasoned professionals. Bears of Blue River get the award for sounding awful. They were a sloppy, out-of-tune mess. MGMT gets the award for being insufferable pricks for refusing to play “Kids”. Only Radiohead can get away with that crap.

Sunday: A Silent Film, Camera Obscura, Belle and Sebastian, Yo La Tengo, The National
My thoughts: A Silent Film was a wonderful surprise. They were great to watch and sounded like a pleasing combination of U2, “Where The Streets Have No Name” era, and Coldplay divided by Keane. Belle and Sebastian had adorable banter with the crowd. Yo La Tengo redeemed themselves for the abysmal performance they delivered the last time I saw them. Finally, The National melted my face off with rock and roll. Matt Berninger jumped off the stage for “Mr. November” and wandered through the crowd, all the while people patiently passed the microphone cord between them to enable Matt’s wandering. He walked right past me on his way back up to the stage. I have never seen a crowd simultaneously keyed-up and controlled. I was able to solve a longstanding mystery. How can he perform in a vest and button down shirt without melting? The answer is he sweats though all his layers of clothing. They finished with “Terrible Love” Matt wandered back into the crowd to dole out set lists, his half-finished bottle of wine, and improbably his microphone stand. I am curious to know who made it out of the gates with that last item.

Over-all, Bunbury was great. I was truly sad when it was over. I can’t wait until next year. 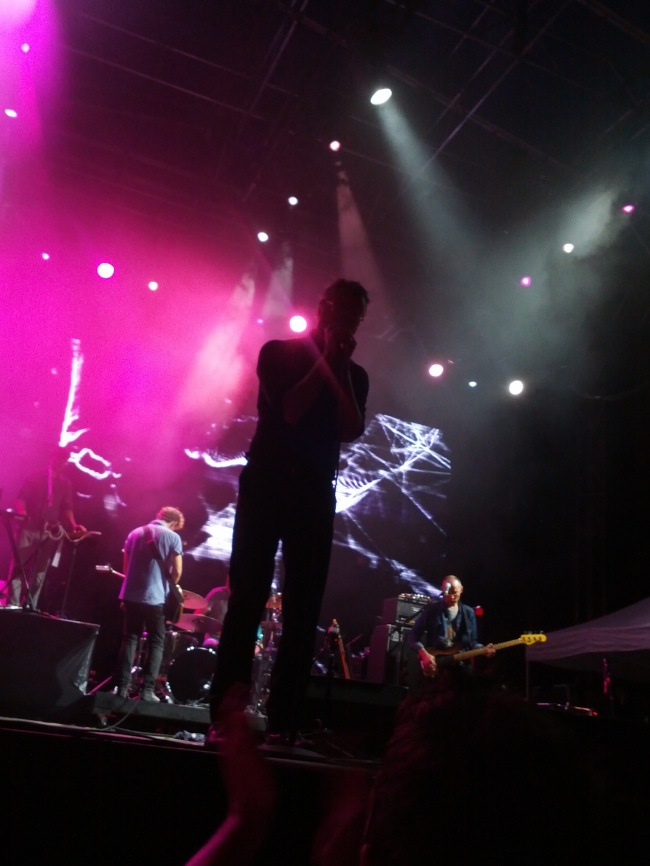 Matt Berninger sweat on me. That could be a command or a statement of fact.

2 thoughts on “A Break from Books: Bunbury Music Festival in Review”